Have you seen the Patriot Act on Netflix?

Also known as “Hasan Minhaj Wants to Be John Oliver For 20 Something Minutes“.

Even though I sometimes disagree with Hasan’s political viewpoints, I really do enjoy the show. I even look forward to new episodes.

And there's a simple reason for that.

Hasan is an absolute master storyteller, and definitely someone you can learn a few things from.

As such, this post discusses how you can hack your presentation skills by watching Netflix's Patriot Act, and learn from the best in the business.

Original or not, Hasan Minhaj is extremely good at what he does – funny, engaging communication and persuasion through solid storytelling techniques.

The show has all the necessary elements.

The show gets a lot of praise for their presentation and graphic design in their YouTube comments. Some of them even want to hire their design team for PowerPoint presentations!

The show’s style is heavily inspired by HBO's Last Week Tonight With John Oliver. Both the shows have live studio audiences and use creative slides, graphics, and videos to tell their stories.

If you want to hack your presentation skills, this post will help you learn the techniques used by both these guys.

Hasan is an expert in modulating his energy levels. He uses his energy with his audience like a DJ plays music in a platinum night club.

Energy, in this case, is the combination of emotions, voice, tone, and volume.

You need to make sure that your energy matches the level of your audience's from start to finish. This is important to keep your audience engaged.

Beware of having the same energy level for too long, though. If you're too hyped up, the audience will eventually be exhausted and confused. If you're too calm, you're guaranteed to put them to sleep.

Another thing I love about Hasan is how he handles unexpected reactions. Even if the audience goes into an awkward silence after a joke, Hasan makes a comeback. When the audience is not happy with a statement, he immediately acknowledges it.

Of course, we are not professional stand-up comedians or performers. We won't have a witty remark or a funny comeback ready for such situations.

But what can we do to save us from those awkward moments that we're all too familiar with? State the obvious.

The “State The Obvious” Technique

“Stating the obvious” as a technique isn’t often… err.. obvious to many people. But, it can help you deal with some scenarios:

How do you do it? You simply state exactly what seems obvious.

Let's look at an example.

Say it's almost lunchtime during an event and most of your audience is hungry (and a bit restless and grumpy due to that). They will look at your presentation as something they have to put up with. Even before you start.

So what can you do? Just state the obvious. If possible, even make fun of it.

If delivered effectively, that line alone will manage to get anything from a chuckle to a good laugh. Tell them you too are hungry. Tell them that you are going to make it short, fast and interesting enough that they won’t regret waiting for their next bite to eat.

Doing this will pull them out of their grumpy hungry state and be present with you.

Stating the obvious is a pretty simple and effective technique to use when you're on stage. But there's something else you should be aware of, too.

Be Very Careful When Engaging With Your Audience

Be careful when having 1-on-1 talks while addressing a large crowd. It can create hecklers who can disrupt your entire presentation. Remember you are the speaker. You don’t want things to turn into a debate or group discussion.

Instead, you can learn from how Hasan handles the crowd in such situations. He simply asks them to cheer/make some noise to communicate back.

“Make some noise if you went to a football game in the last 3 months” – is something Hasan has said in a recent episode. Result? A good number of people in the audience did in fact cheer, and got that mood going.

If you're the kind of presenter that wants to keep things calm and collected, ask something that's relatable to the audience, and then ask everyone in the room to raise their hands instead.

Statements like these are easy ways to engage your audience, even if they are shy.

2) Use Fun Analogies and Comparisons to Communicate Like A Pro

Analogies and comparisons can be powerful when used in your presentations. They help your audience understand the slide from different perspectives.

Hasan uses ridiculous sounding analogies to keep the audience entertained. He uses them to emphasize the importance of the information he conveys.

Even if you cannot use funny, ridiculous ones like he does in the show, you can still throw in some data for comparison. Comparison is what gives context. What sounds more effective in the following three statements?

Do you see the difference yet?

The last option has so much more impact in spite of being vague with numbers! The reason for this is because he uses a benchmark to compare the statement to.

Here's a visual representation of just how fun comparisons and analogies could be: 3) Spend Time Describing A Problem In the Beginning

What is the best technique, to get anyone to pay attention to you?

Start your presentation by explaining a problem as soon as possible. If the problem's relatable, it'll grab your audience's attention faster than a politician's promise on election day.

It's a classic recipe out of Hollywood script-writing playbook. Once you tie some knots, your audience will be waiting to untie them.

The next time you're watching the Patriot Act, keep a look out for how long Hasan spends on the problem at the beginning of every episode. He does this to ensure that his audience is emotionally invested in the rest of the episode.

The reason why Hasan takes so long in discussing the problem is that he wants to describe it through various perspectives.

That's why Hasan is a story-telling guru! He can turn a topic that no one even knows about, and still manage to get his audience invested in the subject matter, simply because he keeps reiterating what the problem is, in various ways.

Remember that every problem has a direct impact on one or more personalities.

A problem could be a huge deal for a single person, a group of people a company, the environment, or in some cases, even an entire country. It could even be a non-living abstract entity like a cultural phenomenon.

Whatever the problem, just be clear on what it is, and take the time to describe it through the eyes of the various personalities in the audience.

For example, one of Hasan's recent episodes (Season 3 Episode 3, to be exact) was about some of the political and sport complications behind India's crickets scene. If you're interested, you can find the whole episode below.

In this episode, Hasan brings in stories from history. He tells us how cricket solved political problems between countries, and explains how the English used it to colonize the world. He even explains how proud the colonies were to beat the sport's founders at their own game!

When crafting your problem's narrative, you could include stories from the past. Just be sure that you:

You could also explain the various effects of the problem. Do this even if the problems seem obvious. After all, one of the biggest and most common mistakes you can make as a presenter is to assume that the audience understands the problem just as much as you do.

Bonus: How to Calibrate Your Energy When You Begin

Let us be honest. The audience in a live TV show is already excited and are full of energy when they're inches away from a celebrity.

But it's very likely that your audience is different.

First, take a moment to put yourself in their shoes. Maybe it helps to ask questions to yourself like the following:

Once you’ve asked yourself these questions, make it a point to state their answers in an obvious way right at the beginning.

By doing so, you reduce the tension and get the audience to relax, and in a position to listen to you.

In summary, the three tips we went over are

At any point in your presentation, whether in the beginning, middle, or end, don’t be afraid of making fun of yourself a little bit. Hasan does it, John Oliver does it, even I do it. It's a very effective way to signal that you’re comfortable and helps your audience relax that little bit more.

But just don't overdo it like Michael Scott did.

Do you have tips and hacks to share with our fellow presenters? Leave 'em in the comments below! 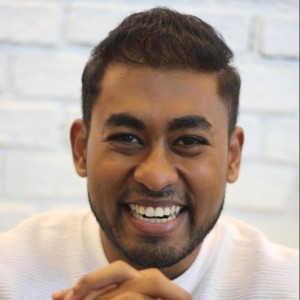 Raj is the Chief Storyteller at Slide Cow. He's a digital hippie whose biggest fear is that he will become a real world one. He is fascinated about user research, copy-writing, crafting marketing campaigns and optimizing funnels. When not doing any of these, he is meditating less than he thinks he does and dreaming about living on an island.
Tired of making boring presentations that don’t get results?