My wife and I decided to be lazy over the weekend and just stay home and watch a movie. It was her turn to pick, so she decided to watch Ted 2 as she didn’t get to watch it when it was released. I agreed since I was in the mood for a movie that was just made to make people laugh.

Keep in mind; this blog post does consist of spoilers! Read at your own risk.

Now, if you don’t know what Ted 2 is, I’ll try and sum it up the best way I can. It’s a movie about a foul-mouthed, drug-abusing teddy bear (voiced by Seth Macfarlane) and his buddy John (Mark Wahlberg) going on crazy adventures together.

You see, Ted is a teddy bear that came to life, but due to some events unfolding in the movie, the state did not recognize him as a legal person – so he can’t do things like marry someone or adopt a child. He, therefore, sought legal action and sued the state.

Here’s a trailer for the movie.

We watched the movie till the end. To be honest, it wasn’t great. There was, however, one scene that spoke to me as a professional presenter and PowerPoint designer.

The premise of this scene is simple. After filing a lawsuit, Ted and his attorney lose the case. His lawyer thought it would be a good idea to file an appeal and find a better, more civil-rights-experienced, attorney to take the case.

Of course, the top-notch civil rights attorney was played by Morgan Freeman. As Patrick Meighan, he’s the bees-knees powerhouse lawyer.

Ted approaches Patrick, but Patrick declines. After inquiring why, Patrick (or should I say, Morgan (I don’t know)) said these beautiful words:

“You know why you lost this case? It can’t be argued by reason. The precedent it sets would affect the public directly. And unfortunately, the public doesn’t judge by reason. It judges by emotion, and you can’t appeal an emotional conviction.”

Of all the quotes in the world, I did not think I’d find something as valuable as this in a movie about a teddy bear smoking marijuana.

The struggle between emotion and logic

The quote is pretty powerful, and right on point. You see, you can’t win a group of people by facts alone. Facts are helpful, sure. In some cases “you can’t argue with them.”

But there is a point where emotion will influence every fiber of your being.

I know you’ve been there, I know, for a fact, you’ve taken a decision where you 100% knew that logic went against it. Yet, something deep inside you told you to do it.

That is the power of emotion, my friends, and it is probably the most effective weapon when it comes to your presentations.

Here’s the deal – when you embed emotion in your presentations, and consequently, your PowerPoint slides, you are doing two powerful things.

First, you’re making your audience remember you and what you’re trying to do. Since we’re on the subject of quotes, here’s another great one by the late American poet, Maya Angelou.

Second, and more importantly, you’re making members of your audience relate themselves to you – by doing this, you’re enabling them to not only listen to what you have to say or read what you wrote, but to convince themselves that the content you have provided is ‘right.’

How to do it

There are so many ways to do this, but I’ll try and give you the way that works for me.

First of all, research the crap out of the members of your audience. Find out what they like, what they dislike, their goals, their passions, and so on.

Then take that information and embed it into your slides through something visually appealing. In this process, make sure that you are making certain parts stand out more than others. These parts are the strong emotional cues.

The “visually appealing” paradox can involve anything – whether it’s an infographic, large text, an image, or a combination of the three, just make sure it’s something that brings out the emotional side of the story.

To try and solidify my point, I’ll give you an example.

I once had a client in the sports event management industry. This client was seeking for high-end firms to sponsor his community marathon events. He asked me to create a sponsorship proposal for him.

Believe me when I say I took three days to research everything about these high-end firms and the people running them.

The goal was to find some sort of emotional trend – something emotional that brought them all together.

As it turns out, that trend existed.

These firms, and the people running them, all had one thing in common: love for the country. The various CEO’s, COO’s, Directors and Senior Managers were all patriots; they want to see their country thrive, and they take pride in the fact they are an integral part of this process.

Check out the slide I did below. Mind you, I removed relevant identities and names for client confidentiality purposes. 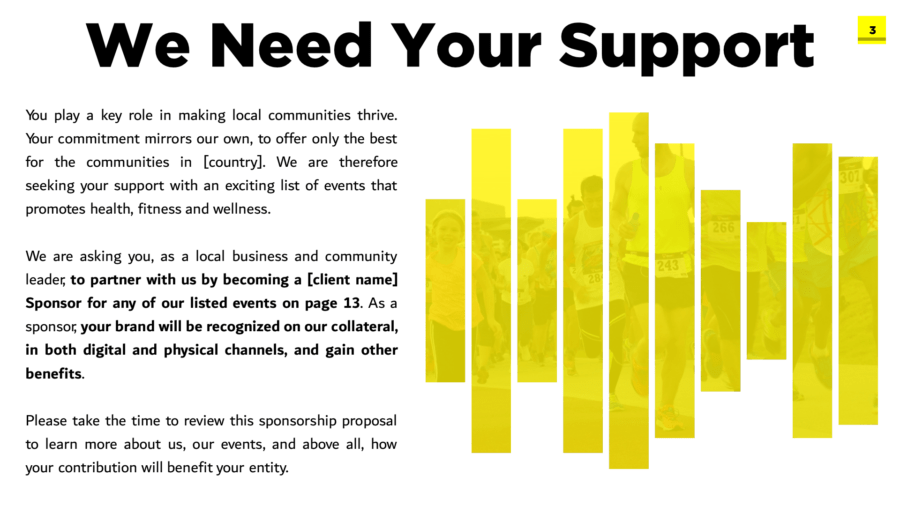 Notice how I didn’t say things like “we are in need of sponsorship” or “we only need this much to make our event work.” I made it all about the audience. I made the audience feel important: we needed their support. We recognized that they are integral to making communities in the country thrive. We made sure to recognize that they are leaders in the field.

That theme of love for the country was consistent throughout the entire proposal.

Emotions are the make or break to your presentations, period. If you want a way to make sure your audience follows your every move, and sell the message you’re getting across, then you need to tap into their emotions.